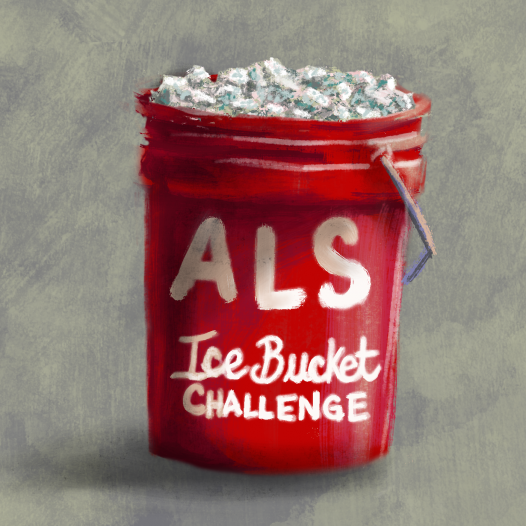 What is ALS (Lou Gehrig’s Disease)?

So you you are probably aware of the ice bucket challenge that swept the internet in 2014, but did you really know what it was about?

Former Boston College baseball captain Pete Frates inspired the Ice Bucket Challenge to go become the viral-video craze of 2014. Peter died in 2019 at age 34 of ALS. Co-founder of the Challenge Pat Quinn passed away in 2020 at the age of 37. Together they impacted the world in awareness efforts, and raised over $250 million for ALS research.

ALS is commonly known as “Lou Gehrig’s disease,” named after the New York Yankees baseball player who was diagnosed on his 36th birthday in 1939 and retired that year.

You can read more about Lou Gehrig’s journey and final baseball season here. MLB teams are now hosting a Lou Gehrigh’s Day on June 2nd to honor him and bring awareness to the disease.

What does the name mean?

A-myo-trophic comes from the Greek language. “A” means no or negative. “Myo” refers to muscle, and “Trophic” means nourishment , together it means “No muscle nourishment.” When a muscle has no nourishment, it “atrophies” or wastes away. “Lateral” identifies the areas in a person’s spinal cord where portions of the nerve cells that signal and control the muscles are located. As this area degenerates or breaks down it leads to scarring or hardening (“sclerosis”) in this region of the cord.

How does ALS affect a person?

ALS is a progressive disease that destroys nerve cells in the brain and spinal cord which control the muscles throughout the body. When these nerve cells (also called motor neurons) die, the brain can no longer send impulses (messages) to the muscle fibers that normally result in muscle movement. The disease most commonly afflicts people between the ages of 40 and 70. As many as 30,000 Americans have the disease at any given time. It’s 20% more common in men than women.

For unknown reasons, military veterans are up to twice as likely to be diagnosed with the disease as the public.

The earliest symptoms of the disease depend upon which nerves and muscles are first affected. Any muscle group may be the first to show signs of the disease. For example, the person may experience twitching and weakness of the muscles of the hands or lower legs. If the muscles of the face or throat are affected, the problem at onset would be difficulty with speaking, chewing, swallowing or movements of the tongue and face. If the muscles of the chest are affected the person may have difficulty breathing. For some people the first symptoms may be involuntary crying or laughing. In the beginning, muscle groups on only one side of the body may be affected, but as time passes, more and more muscles on both sides are involved and the person becomes totally paralyzed. Throughout it all people’s minds are unaffected.

How fast the disease progress and in what order this occurs is very different from person to person. While the average survival time is three years, about 20 percent of people with ALS live five years, 10 percent will survive 10 years and 5 percent will live 20 years or longer.

Progression is not always a straight line in an individual, either. It is not uncommon to have periods lasting weeks to months where there is very little or no loss of function. There are even very rare examples in which there is significant improvement and recovery of lost function. These ALS “arrests” and “reversals” are, unfortunately, usually temporary. Less than 1 percent of people with ALS will have significant improvement in function lasting 12 months or longer.

The progression of ALS differs between each patient, and not all patients experience the same symptoms or speed of progression, but it is generally divided into three stages: early, middle, and late.

The first and most common ALS symptoms are muscle weakness and atrophy (wasting away of the muscle). Other symptoms at this stage typically include things like cramping, as well as muscle twitching (known as fasciculations), stiffness and tightness (known as spasticity). These symptoms usually affect one part of the body, to begin with, depending on which neurons are affected first. In most cases, this is the neurons controlling the arms, hands, or legs – a condition known as limb onset ALS.

Even in the early stage, ALS symptoms make it hard for people to perform everyday tasks such as cooking, dressing, and getting around due to the loss of manual dexterity in the hands and awkwardness of the legs and feet.

As ALS symptoms progress to the middle stage, muscle weakness and atrophy get more pronounced and start spreading to other parts of the body. Some muscles will lose strength, while others will become completely paralyzed. At this point, many ALS patients have profound difficulty with or are no longer able to walk or use their hands and arms. Some muscles near the joints may become permanently contracted, which prevents the person from straightening out the affected limb.

People with middle-stage ALS start to lose the ability to swallow food and their own saliva (dysphagia), and they may lose the ability to cough and breathe on their own, which increases the risk of choking. Muscle weakness in the throat can also make it difficult to speak and breathe (dyspnea), and due to a reaction called the pseudobulbar affect, some ALS patients experience periods of uncontrollable laughter or crying.

As the patient progresses to the late stages of ALS, most of their voluntary muscles will become paralyzed. When this happens to the muscles in the mouth and throat, as well as the muscles used for breathing (i.e., diaphragm), the patient can no longer eat, speak, or breathe on their own – requiring a feeding tube and a ventilator for these tasks.

Most people with ALS die within two to five years after the symptoms first appear, usually of respiratory failure or malnutrition. Other less common causes of death include pulmonary embolism (due to an obstructed artery in the lungs), heart arrhythmia (the heart beats too fast, too slow, or irregularly), or pneumonia (due to breathing food or water).

Next week we are going to talk about diagnosis and management of ALS.

Triumph over a Fatal ALS Diagnosis

Charlie read a few paragraphs from John Ferrailolo’s book Kinda Ugly: How I Triumphed Over a Fatal ALS Diagnosis (and an Oversized Nose).  John shared his journey and experience, along with some powerful wisdom in his letter to his grandchildren. You can buy his book on Amazon.