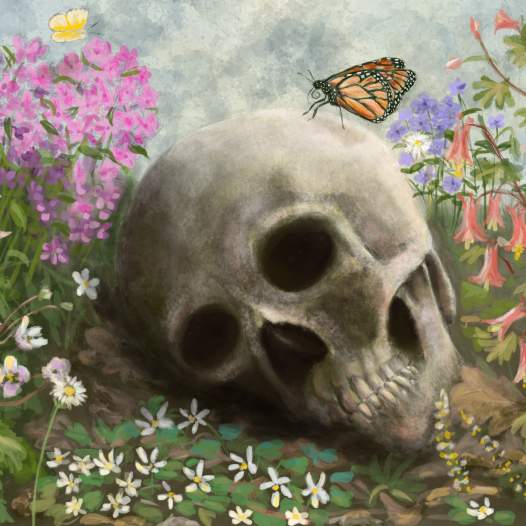 As we move from the last hours of living to what happens to a body after death, Marianne talks about decomposition of a body. When you die, your body’s microbiome – which is the colony of bacteria, viruses, fungi and other microorganisms living inside you – collapses. Your body then undergoes five stages of decomposition before turning into a skeleton: from freshly dead to bloat, active decay, advanced decay and in the end dry or remains. This process begins at the moment of death. Charlie gives us a truly biblical recipe and then introduces the idea of body farms and what occurs on them.

What happens to your body after you die? You probably have a vague idea, but not a thoroughly realistic conception of the changes your body will undergo after death. You are not alone. Most people possess very little understanding of the process of human death and decay.

A Guide to Decomposition

The rate of decomposition is largely dependent on the cause of death, the weight of the deceased and other environmental factors. For example, bodies decay at a faster rate if they are exposed to the elements or wildlife, if they are in warm environments, or if they are under water.

To make this discussion easier, I am going to focus on the decomposition process without embalming when a body is in a neutral climate, not in a coffin, and the remains are undisturbed. Please see the article on stages of human decomposition in our resources for a detailed description.

Skeletonization can take anywhere from 1 month to several years, depending on the environment, burial, etc. You may be wondering: will a skeleton also decompose? The answer is yes. If animals do not destroy or move the bones, skeletons normally take around 20 years to dissolve in fertile soil. However, in sand or neutral soil, skeletons can remain intact for hundreds of years…remember the bog people from Episode 34?

Why is this important to know? Many people are choosing alternatives to the traditional embalming and burial. Information about what happens to the body after death if not interfered with by embalming is good information to have. You might not want to chat about it over dinner, unless you are with nurses, in which case, we love to talk about these things.

Here’s just one of the many natural options:

Have you ever watched CSI or NCIS? How did they know how long someone had been dead, or a body was in the ground? It turns out, there’s a long history of research into decomposition to answer just that. Charlie tells us about body farms at several institutions. See the video below for one of them, the University of Tennessee Forensic Anthropology Center.

If you need a laugh, here’s Kathy Bates in the Blind Side making sure Michael is well informed for his College choice!

Here’s some resources if you want to read more:

We have a spiritual cake for you this week – Scripture Cake. Be sure to listen to its interesting history!

You don’t have to rely on your Bible knowledge to interpret this recipe – get it right here from Southern Living.