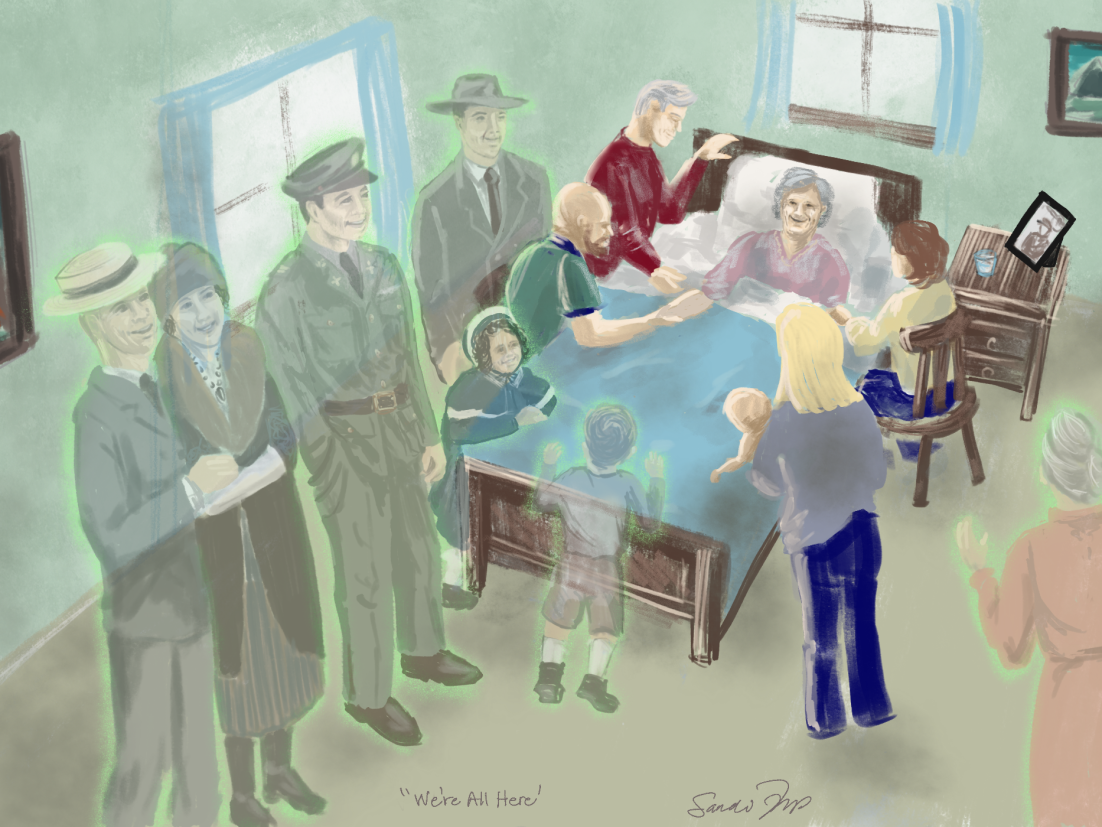 S2E33: What is Near Death Awareness, and How do I Respond?

Near death awareness (NDA) is a term to describe a dying person’s experiences of the dying process and broadly refers to a variety of experiences such as end of life dreams or visions.   Up  to 50-60% of patients will experience some form of NDA prior to their death.  How do you respond?  Learn about the difference between NDA and delirium, the impact it can have to decrease existential stress, and what to do when someone has deathbed visions.

What is Near Death Awareness?

Near death awareness (NDA) is a term to describe a dying person’s experiences of the dying process and broadly refers to a variety of experiences such as end of life dreams or visions. This awareness includes visions of past deceased relatives or friends, religious figures, and a visionary language pertaining to travel. Collective research supports mounting evidence that deathbed visions typically yield peaceful deaths.

Information comes from broadly reported anecdotes and several case series which suggest that up to 50-60% of patients will experience some form of NDA prior to their death.

The language patients use to communicate NDA may be symbolic and if caretakers are not aware that NDA can occur, patients may be ignored, treated condescendingly, or inappropriately medicated for delirium.  Family, friends, and health professionals may respond with annoyance, frustration, or fear. This, in turn, may cause isolation, suffering, and impair the dying person’s ability to communicate meaningful experiences at the end of life.

In studies engaging both patients and caregivers, NDA emerges as distinct from delirious states. In general, as opposed to hallucinations in delirious states, NDA occur in clear consciousness; they are reported with clarity, detail, and organization; and they often evoke feelings of comfort, rather than distress

Impact of NDA on Existential Distress

NDA also differ from deathbed hallucinations with respect to their impact on patients. In her 2010 analysis of deathbed phenomena, Mazzarino-Willett found that NDA tends to be spiritually transformative, while hallucinations tend to be relatively insignificant. In addition, deaths including NDA are more frequently calm and peaceful than are deaths without such experiences.  NDA’s has been distinctly observed to affect positively the quality of the dying process.

The recognition of NDA requires attentive listening. Family, friends and caregivers can help decipher NDA messages. The content of NDA often will vary based on cultural background, but several common experiences relating to NDA have been described and include:

Dreams, which occur while asleep, and visions, which occur while awake, may feature the comforting presence of deceased and living loved ones as well as unknown individuals and are described by dying patients as having high degrees of, vividness, recall, and reality.   (Timmy, I’ll be right with you)

Occur near death with the time frame ranging from hours, days, weeks, or even months prior to death. The content are varied and often include previously dead family members, pets, or currently dying individuals in the family.

What can you do to help?

The literature suggests that when someone is having NDA we should ask questions about the experience and accepting their significance for patients and families. The person who is dying may fear of judgment, ridicule, and embarrassment and may not mention what they are experiencing.

Hospice Nurse Julie has been sharing to Tiktok many of the same tidbits we have in our Last hours of living series. She has about three on this very topic – seeing angels and dead relatives. Watch her video below for some spine-tingling accounts from her comments section: https://www.tiktok.com/@hospicenursejulie/video/7027299877956652293

For our recipe this week, we are traveling to Italy for customary funeral foods: Chicken Broth with Flaked Chicken Breast Meat. Head over to Italy Revisited for this recipe.

http://www.italyrevisited.org/photo/Folk_Sayings_on_DeathIn keeping with the Italian theme, Charlie also shared some Italian proverbs and folk sayings on death and dying. Did you hear one you like? Italy Revisited has several listed out. You can also read about Italian funeral traditions.

Also, off topic, here’s the link to the movie Marianne was trying to remember: Victoria & Abdul (2017) – IMDb available on Netflix

Have a recipe? Want to rate Charlie’s Italian? Drop us a note! And be sure to subscribe to be eligible for our monthly prize drawings!

S2E33: What is Near Death Awareness, and How do I Respond?